It Has Been a Real Inauguration of Theatre

Zsolt Szász (b. 1959) has been managing editor of the professional journal Szcenárium since its foundation in 2013, and dramaturge at the National Theatre in Budapest (Vitéz lélek /A Knightly Soul/, 2013; János vitéz /John the Valiant/, 2014; Csíksomlyói passió /Passion Play of Csíksomlyó/, 2017). Formerly he directed two productions at the Attila Vidnyánszky-led Csokonai Színház (Csokonai Theatre, Debrecen): Talizmán /Talisman/, 2008; Csongor és Tünde /Csongor and Tünde/, 2010). He was art director of Nyírbátori Szárnyas Sárkány Nemzetközi Utcaszínházi Fesztivál (Winged Dragon Street Theatre Festival in Nyírbátor) from 1993 to 2013. In cooperation with puppet theatre dramaturge Márta Tömöry he created the Nemzetközi Betlehemes Találkozó (International Meeting of Nativity Players) in 1990. He received several national and international awards as an actor, puppeteer and director of the companies established by himself. For his puppeteering activity he was awarded the Blattner Prize in 2007.

Ágnes Pálfi (b. 1952) has been editor of Szcenárium since 2013. Between 1980 and 1993 she edited the Népművelési Intézet (Institute for Culture) journal entitled Kultúra és közösség (Culture and Community) as well as the poetry column of the journal Polísz (Polis) from 1998 to 2005. She had a teaching job first at Toldy Ferenc Gimnázium (Toldy Ferenc Grammar School) from 1994, then, between 1999 and 2009, she was professor at the Department of World Literature, Miskolci Egyetem (University of Miskolc), where she obtained her PhD in 2005. The subjects she taught included the comparative analysis – along the year-cycle model of organic culture – of the grand narratives of the four canonical Gospels and the four modern European “heroes” (Hamlet, Don Juan, Don Quixote, Faust). She has published two collections of essays and five volumes of poetry. A selection of her poetry, Mőbiusz (Mobius), was published in 2014.

Ágnes Pálfi (Á. P.): “It has been a real inauguration of theatre!”, I exclaimed involuntarily when the hour-and-a-half production by Teatro Potlach was over. Well-well, it has taken an Italian company to come along and make us settle in and bless the interior and exterior of our theatre, the building caught in the crossfire of ignoble attacks and debates since its foundation stone was laid. It also makes one think that it was not until this season that the facade has finally received the inscription “Nemzeti Színház” (National Theatre).

Zsolt Szász (Zs. Sz.): Perhaps MITEM itself has not become an event of our own before the third time, either. It has been a special pleasure for me, artistic director of an international street theatre festival[1] over twenty years, to see the appearance of this genre at the event, too. And at such a scale to start with that it could really get the spirit of the place to express itself. It was also justified by the Potlach artists’ accomplishment that the designers of the surroundings of the theatre building and the garden did in those days create a space which, with all its eclecticism, can be operated well and to which symbolic meaning can be attributed…

The flash report first appeared in the  Szcenárium Magazine. Find out more here. 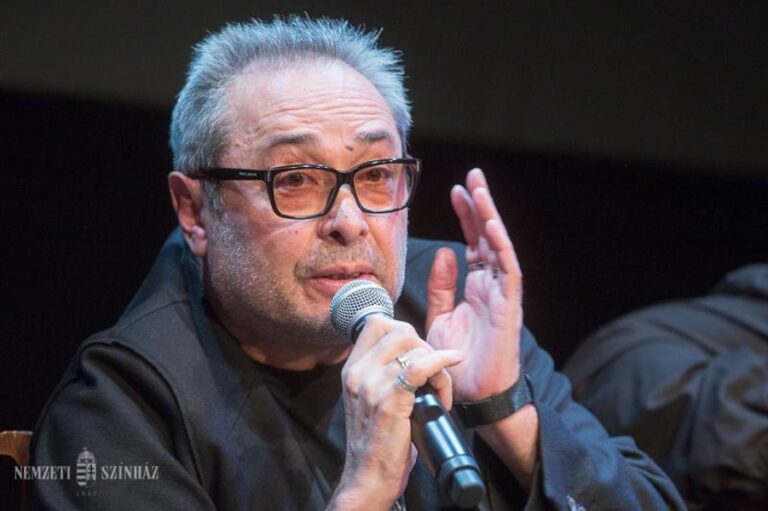